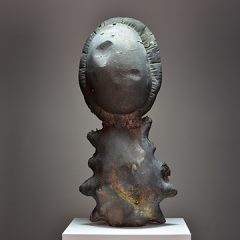 Vogler’s new series of ULTRASCULPTURES, a series of life-size, amorphously shaped bronze busts and fetish-like figures, takes us on a journey into free association with the humanoid figure.

It confronts us with different facets of human existence, awakens associations with African, Asian, oceanic or even Aztec sculptures, although they clearly are not. The surfaces have been worked through to the last detail and yet they seem as if they came directly from fire or remind us of excavated prehistoric finds. Condensed conglomerates of forms that encourage us to think and depict the human body more freely – strictly defined in their form, they form fantasy spaces, Phanasieräume, that leave room for the free, subjective connoting of the viewer.  HUBERTUS HOFFSCHILD, LÜBECK, GERMANY
MORE
LESS 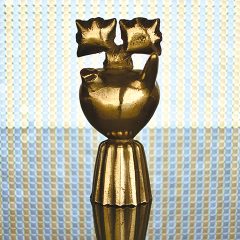 Dancing in front of us are strange beings – interesting, but alien. At first sight, the bronze figures appear to be incomplete; they are missing limbs, even heads, which may well account for their otherness.

But more disconcerting than the torsos, which we have encountered many times throughout art history, is the fact that we cannot make out whether the bodies represented here are female or male figures. Physical and social signifiers of sex are abundant (vaginas and penises, broad hips and tulle skirts, for instance), but in their combinations they only foil our expectations. The PRINCE_SSES’ external markers create confusion; Vogler juxtaposes female body shapes with male sexual organs in one figure, making it difficult for us to ascribe them a clear identity.

Like many other series of works by Fabian Vogler, his PRINCE_SSES confront us with sexuality in all its shimmering truthfulness and diversity. Vogler is one of the few contemporary artists to reflect on the elemental aspects of sexuality and use that perspective to explore human identity. Here, Kunstwollen hones in on sex and gender, and in his works, Vogler negotiates these terms in their most comprehensive sense, as referring to a social role (gender) and a person’s physical constitution (sex). Through his art, Vogler forges a connection with the great female artist of sexual identity: Meret Oppenheim, whose aesthetic metaphysics offers up a response to two major questions: How do we overcome socially constructed gender differences? and: What defines human creativity? I would like to draw on Oppenheim at this point, as her perspective opens up an ideal avenue for us to approach Vogler’s work. DR. CHRISTIAN WALDA 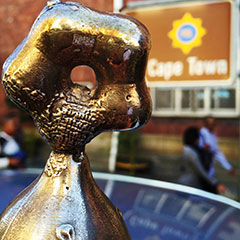 DITTMAR’S BROTHERS AND THEIR TRAVELS

Dittmar’s Brothers exist as an edition of 7+2ap in nine bronze versions. The “brothers” love traveling and live in different parts of the world. Therefore each bronze cast has it’s own photo series – DITTMAR’S BROTHER’S TRAVELS 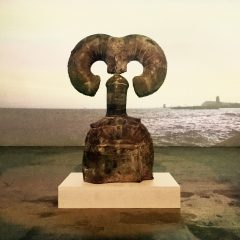 “Up to now the Meninas are a series of 8 large standing sculptures inspired by a painting of the same name by Diego Velázquez. This is one of the best known and most discussed paintings in art history.

It is supposed to be the portrayal of the “theology of painting” (Luca Giordano) or the “philosophy of art” (Thomas Lawrence). Its enigmatic iconography seems to be one of the best reflections on the question: What is a painting able to show? In the centre of the composition we see the young Infanta Margarita wearing a robe typical for the time, yet it is by far unsuitable for a 5-year old. The little girl is standing there, rigid as if wearing armour, not capable of moving naturally and sternly looking towards the observer. Dresses of that era deform the body and do not allow its original shape to be seen. The tight corsage and the crinoline reflect an ideal silhouette of the time, however the anatomical facts as well as the age of the wearer are being totally neglected. The garment does reflect a premature eroticisation. Fabian Vogler uses the young Infanta as a basic shape to build his sculptures for this series.” 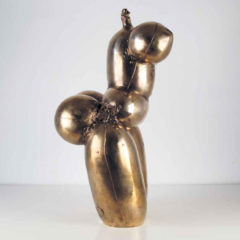 “Fabian Vogler’s figures must be considered as archetypes. On the one hand he is deliberately playing with the familiar, conventional canon of forms, he bestows titles to his works and puts them into a historical context. Though, on the other hand, he wants to show the objective metaphysical reality.

This is an anthropological approach: What are human beings all about? How does the time we live in influence our being? Starting from elemental forms, which are deeply rooted in our sub-conscious he endeavours to create “contemporary idols”. Each time has its idols, what might one of these look like today?“ 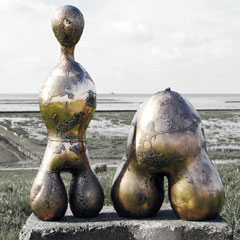 “Images of idols are deeply rooted in people. In this instance, the artist mentions the Venus of Willendorf and also the works of Constanstin Brancusi. Brancusi reduces his pieces of art to elemental forms, to a core shape. This introduces abstraction and “primitivism” into sculptural art.

“Simplicity is complexity resolved”1, writes Constantin Brancusi. The simple form is mantling the essence, the spiritual reality in each sculpture. The head, most reduced, is for Brancusi the ideal image of the Greek “idea”. The simplicity, balance and stillness of Brancusi’s Sleeping Muse leads us directly to Fabian Vogler’s three series of heads.” 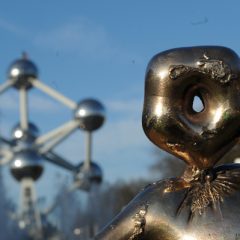 TOGETHER WITH PHOTOGRAPHER SEAN DANIELS 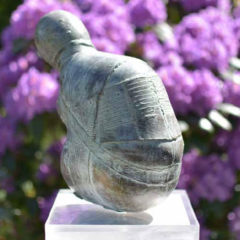 There are various series on the topic of heads, “Köpfe”. By following the link, you can get an overview. 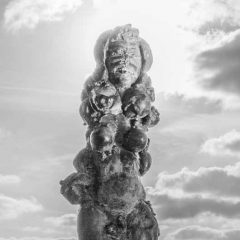